Just as the name of the states, Lahey’s recipe calls for no kneading, which is a beautiful thing because this dough comes together pretty quickly.  Throw a few ingredients into a bowl, mix one, two, three times – boom, you’re done.  Cover and let rise.  Speaking ofthe rise, the only minor drawback – and it is minor – I see is the long rise time.  The recipe calls for at least 18 hours, so some planning ahead is required.  Trust me, it is a small price to pay.  Another interesting point about Lahey’s dough is that he doesn’t use very much yeast but is able to achieve a good bubbly crust with a deep flavor due to the long rise time.

After rising for a little over 18 hours, dough is portioned out and each dough ball makes one 10 – 12 inch pizza. Looks just like dough that has been kneaded!

Use a scale to measure your dry ingredients – it is the most accurate.

Use your hands to stretch and shape dough. A rolling pin crushes tiny little air bubbles that give the crust is chewy, airy texture.

I used a pretty simple sauce. Canned whole tomatoes, drained and crushed by hand. Two tablespoons of olive oil, big pinch of salt and pepper. About a teaspoon of sugar.

Apply a thin layer of sauce…

I used a mixture of fresh and shredded mozzarella…

Cheese pizaa hot out of the oven – perfection!

One thing to point out:  my pizza stone is currently out of commission, so I followed Lahey’s recipe in terms of how to cook the pizza without one.  Needless to say, I was very pleased with the results.  However, with a stone I believe I would have achieved a more bubbly crust.  Overall, a great recipe for delicious homemade, artisan style pizza.

Now let’s take a look at the thin crust recipe.  This crust features a much shorter rise time and more yeast. That’s the odd thing about yeast – more leads to a faster rise and sometimes more flavor.  However, less yeast and a longer rise time leads to similar results.  It is not that simple, but you get the idea.  This recipe calls for about 5 minutes of kneading, but again, the crust is formed by hand, not a rolling pin.  I am a big believer in not over-handling the dough; which can make it tough and brittle.

I used uncooked Italian sausage, mushrooms, fresh mozzarella and shredded mozzarella. Baked at 400 for around 12 – 14 minutes on an inverted sheet pan.

The finished product! Thin crispy crust, with a nice depth of flavor and balanced toppings. I was very pleased with how this turned out.

As I said earlier, I was very happy with how the thin crust turned out.  The recipe produce a thin, crispy crust, with a nice depth of flavor and balanced toppings. Of course – I cut into squares. 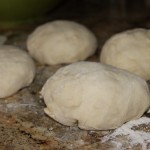